It’s was the first time that we had a bit more time in Madrid to explore this fab city for real. My times before, I was always there on short haul trips with minimum time and Vincenzo also for work as a photographer on fair trades. Like this time actually, but we decided to come 2 days earlier to once in a while see more! And we didn’t regret it.

So, we want to share this 2 days full of impressions with you.
We took a flight in the early morning at 7:30h to be there for breakfast. As we had to have a good connection to the fair and the airport and overall to the sights and nightlife, we decided to stay in “Malasaña“. So far a very good decision. It is an alternative hood where you can find plenty of bars, vintage stores, small nice cafes and outside terraces to have a lunch. 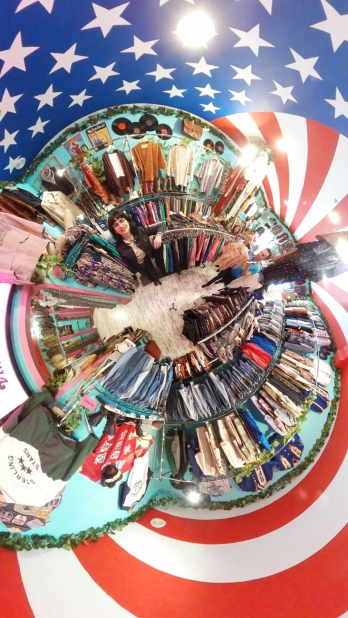 So, if you are still not sure where to stay, search for an Airbnb in that quarter!
We started without having an idea what we have to see. So we just stopped at “Plaza 2 de Mayo” and bought us a coffee and a nice homemade donut to eat outside in the sun. And here we started making also our route where to go. Maybe not really pro, but is our way to travel. We love to go with the flow.
Also at “Plaza 2 de Mayo“, they were just building up a little second-hand market the “Malamarket“! If you are into second-hand markets you should pass by there. Really cool Vintage stuff to reasonable prices. It is every Saturday from 10-17h. 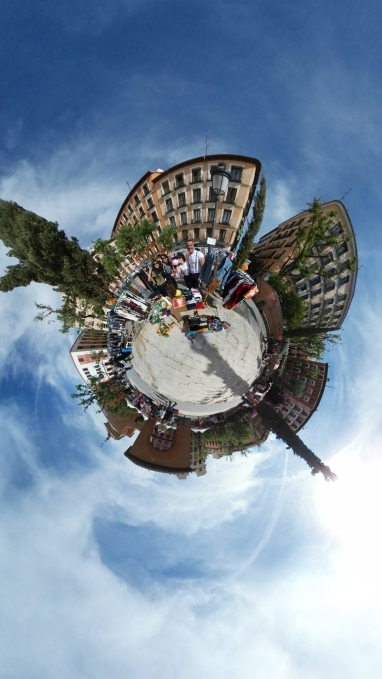 First, we walked through the streets of “Malasaña”. How to describe that neighborhood the best? It is colorful, trendy, cool, alternative, a lot of vintage styles and hipster friendly.

They built the neighborhood in the 18th century as an expansion of Madrid and has been a witness of two rebellions.
In 1808 the uprising against Napoleon and in the 80s there were the “Movida madrileña”. After the dictator’s death, the “Movida madrileña” was a socio-cultural movement in 1975. The people celebrated freedom with crazy music and bohemian art. There are bars who are still existing from that time and where they also play the music from that time. For example Bar Penta.
Where else to go in Malasaña:

As we continued we heard that around the corner is something going on. It sounded like traditional Irish music. Well, how I imagine traditional Irish music 😉 And we went there to see what is going on. It was the group “Magerit Dulzeina Viva” a “Folclore Castellano” group. We made some pictures and videos with them and sure we started talking with them, and they invited us to have a beer with them. It was a just a nice chance encounter. And we are really lucky that we followed our instinct to see what was going on there.

So and now there is coming to a series of little “Plazas” that we have visited:
“Plaza del Grial” just a little Plaza that is still in Malasaña. Here a man playing the trumpet. We recorded it because almost on every “Plaza”, there was a man playing his trumpet. We felt like having a soundtrack.
“Plaza de la Puerta del Sol” on of the most famous places. Here are often demonstrations. Like that time, there was the demonstration of young people who were fighting for a better future after their studies.
“Plaza Mayor” a really beautiful huge atrium with old buildings all around. Here it is popular to eat a “Bocadillo de Calamares”.
So from here, we passed by the Plaza de la Villa where we did the MADRID GIF from the Headline and walked through Calle Mayor until the Kings Palast the “Palacio Real”.
Here we made a little break at “El Ancio Key de los Crinos”. Which is nice because it has a little terrace and it is just next to the Palast. But the prices are quite high and the Tapas not very good. But for just relaxing a bit until the next leg it is perfectly fine!
After our little break to we went to the Cathedral de Santa Maria. Here you can go inside with just paying a donation.
It is a very beautiful, old and big church. 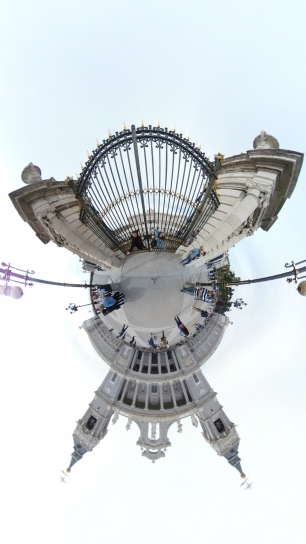 As the queue to the Palacio was really long, we decided not to go inside that day. We preferred to see other things.
So we kept on to the beautiful “Plaza España”, that is like a little park. Where you can have just a little pause from the stressful city life.

So and from here we walked back via Gran Via to Malasaña. Totally exhausted but satisfied we came back to our Airbnb flat and had a little sleep to have the energy to explore the nightlife of Madrid.
And we were quite surprised about the kind of Clubs they have there. We went for example to “Bar Palermo” that is in Calle Palermo 21 close to Metro Esperanza. And if you wouldn’t know, that there is a bar inside that building you wouldn’t ever guess so. Because from outside it just looks like a normal house. But it is a very cool bar, with a nice mix of people and old classic Rock songs mixed with new ones.
All in all, we had a full day with loads of impressions and experience and nice people.
And as it became late we slept really long on Sunday. To start our day, we met some friends to have some beer in the famous “Calle Ponzano“. In that street, you have plenty of options of restaurants, but if you are looking for a terrace to sit outside, this is not the right place for you! But if it is a cold and rainy day, it is perfect, because you just can go from one bar to another to try their tapas and different kind of beer in high quality. What you really should try, but be aware sometimes you have to wait long to get a seat, is “Sala de Despiece“. Here you can go just to pick something, have lunch or dinner. And the quality is excellent.
And if you want to try a traditional beer from Madrid, you should go to”Bar Fide”. It is one of the oldest bars in that street.

So, as the weather was too good that day to be inside, we decided to go to the Park Retiro. It is just a huge and beautiful green Park in the middle of the city. Once more I recognized how important it is to have Parks in big cities. Here we had some croquetas in the Terrace of the Park Restaurant and then we just laid down to enjoy the sun and the freedom of the Park.

All in all we had very good vibes in Madrid and for sure we will return!

¡And here one last Restaurant TIP where you really should go, if you want to eat Tapas of really high quality with a cozy and hip design of interior decoration.

The “Cachivache Taberna“. It is next to the Metro Station “Columbia” in Calle Serrano 221!

The words in bold are linked to helpful information for your journey!

We want to inspire you to travel and to show you the beauties of our fantastic planet!

Apollo 8
1968 (Diary of a Crewmember):
“I think we were all surprised, that we have traveled 240.000 miles to see the moon, and actually the real beauty was, seeing the earth.”